How To Use CountVectorizer for Text Processing?

How To Use CountVectorizer for Text Processing? 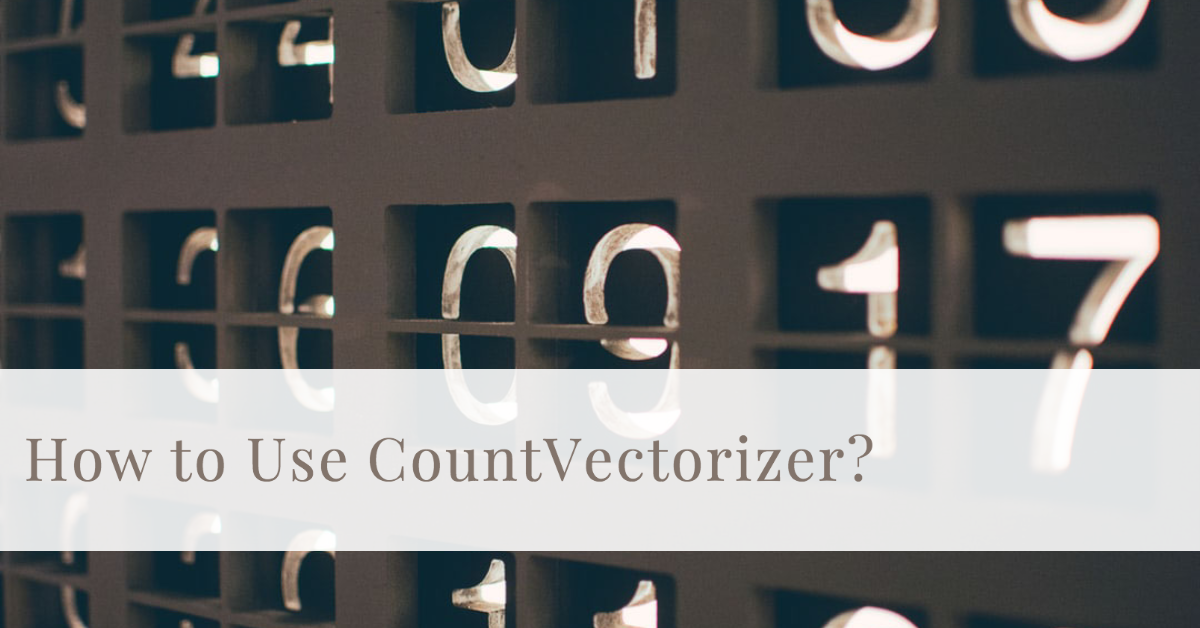 Scikit-learn’s CountVectorizer is used to transform a corpora of text to a vector of term / token counts. It also provides the capability to preprocess your text data prior to generating the vector representation making it a highly flexible feature representation module for text.

In this article, we are going to go in-depth into the different ways you can use CountVectorizer such that you are not just computing counts of words, but also preprocessing your text data appropriately as well as extracting additional features from your text dataset.

Example of How CountVectorizer Works

To show you an example of how CountVectorizer works, let’s take the book title below (for context: this is part of a book series that kids love) :

This text is transformed to a sparse matrix as shown in Figure 1(b) below:

Notice that here we have 9 unique words. So 9 columns. Each column in the matrix represents a unique word in the vocabulary, while each row represents the document in our dataset. In this case, we only have one book title (i.e. the document), and therefore we have only 1 row. The values in each cell are the word counts. Note that with this representation, counts of some words could be 0 if the word did not appear in the corresponding document.

While visually it’s easy to think of a word matrix representation as Figure 1 (a), in reality, these words are transformed to numbers and these numbers represent positional index in the sparse matrix as seen in Figure 1(b).

Why the sparse matrix format?

With CountVectorizer we are converting raw text to a numerical vector representation of words and n-grams. This makes it easy to directly use this representation as features (signals) in Machine Learning tasks such as for text classification and clustering.

Note that these algorithms only understand the concept of numerical features irrespective of its underlying type (text, image pixels, numbers, categories and etc.) allowing us to perform complex machine learning tasks on different types of data.

Side Note: If all you are interested in are word counts, then you can get away with using the python Counter. There is no real need to use CountVectorizer. If you still want to do it, here’s the example for extracting counts with CountVectorizer.

In this tutorial, we will be using titles of 5 cat in the hat books (as seen below).

I had intentionally made it a handful of short texts so that you can see how to put CountVectorizer to full use in your applications. Keep note that each title above is considered a document.

What happens above is that the 5 books titles are preprocessed, tokenized and represented as a sparse matrix as explained in the introduction. By default, CountVectorizer does the following:

Now, let’s look at the vocabulary (collection of unique words from our documents):

As we are using all the defaults, these are all word level tokens, lowercased. Note that the numbers here are not counts, they are the position in the sparse vector. Now, let’s check the shape:

We have 5 (rows) documents and 43 unique words (columns)!

Now, the first thing you may want to do, is to eliminate stop words from your text as it has limited predictive power and may not help with downstream tasks such as text classification. Stop word removal is a breeze with CountVectorizer and it can be done in several ways:

Let’s look at the 3 ways of using stop words.

In this example, we provide a list of words that act as our stop words. Notice that the shape has gone from (5,43) to (5,40) because of the stop words that were removed. Note that we can actually load stop words directly from a file into a list and supply that as the stop word list.

To check the stop words that are being used (when explicitly specified), simply access cv.stop_words.

The goal of MIN_DF is to ignore words that have very few occurrences to be considered meaningful. For example, in your text you may have names of people that may appear in only 1 or two documents. In some applications, this may qualify as noise and could be eliminated from further analysis.

Instead of using a minimum term frequency (total occurrences of a word) to eliminate words, MIN_DF looks at how many documents contained a term, better known as document frequency. The MIN_DF value can be an absolute value (e.g. 1, 2, 3, 4) or a value representing proportion of documents (e.g. 0.25 meaning, ignore words that have appeared in 25% of the documents) .

Eliminating words that appeared in less than 2 documents:

Now, to see which words have been eliminated, you can use cv.stop_words_ as this was internally inferred by CountVectorizer (see output below).
Yikes! We removed everything? Not quite. However, most of our words have become stop words and that’s because we have only 5 book titles.

To see what’s remaining, all we need to do is check the vocabulary again with cv.vocabulary_ (see output below):

Sweet! These are words that appeared in all 5 book titles.

Just as we ignored words that were too rare with MIN_DF, we can ignore words that are too common with MAX_DF. MAX_DF looks at how many documents contained a term, and if it exceeds the MAX_DF threshold, then it is eliminated from consideration. The MAX_DF value can be an absolute value (e.g. 1, 2, 3, 4) or a value representing proportion of documents (e.g. 0.85 meaning, ignore words appeared in 85% of the documents as they are too common).

I’ve typically used a value from 0.75-0.85 depending on the task and for more aggressive stop word removal you can even use a smaller value.

Now, to see which words have been eliminated, you can use cv.stop_words_ (see output below):

In this example, all words that appeared in all 5 book titles have been eliminated.

Why document frequency for eliminating words?

Document frequency is sometimes a better way for inferring stop words compared to term frequency as term frequency can be misleading. For example, let’s say 1 document out of 250,000 documents in your dataset, contains 500 occurrences of the word catnthehat. If you use term frequency for eliminating rare words, the counts are so high that it may never pass your threshold for elimination. The word is still rare as it appears in only one document.

In the example below, we provide a custom tokenizer using tokenizer=my_tokenizer where my_tokenizer is a function that attempts to keep all punctuation, and special characters and tokenizes only based on whitespace.

Fantastic, now we have our punctuation, single characters and special characters!

In many cases, we want to preprocess our text prior to creating a sparse matrix of terms. As I’ve explained in my text preprocessing article, preprocessing helps reduce noise and improves sparsity issues resulting in a more accurate analysis.

Here is an example of how you can achieve custom preprocessing with CountVectorizer by setting preprocessor=<some_preprocessor>.

In the example above, my_cool_preprocessor is a predefined function where we perform the following steps:

One way to enrich the representation of your features for tasks like text classification, is to use n-grams where n > 1. The intuition here is that bi-grams and tri-grams can capture contextual information compared to just unigrams. In addition, for tasks like keyword extraction, unigrams alone while useful, provides limited information. For example, good food carries more meaning than just good and food when observed independently.

Working with n-grams is a breeze with CountVectorizer. You can use word level n-grams or even character level n-grams (very useful in some text classification tasks). Here are a few examples:

When your feature space gets too large, you can limit its size by putting a restriction on the vocabulary size. Say you want a max of 10,000n-grams. CountVectorizer will keep the top 10,000 most frequent n-grams and drop the rest.

Since we have a toy dataset, in the example below, we will limit the number of features to 10.

Notice that the shape now is (5,10) as we asked for a limit of 10 on the vocabulary size. You can check the removed words using cv.stop_words_.

Ignore Counts and Use Binary Values

By default, CountVectorizer uses the counts of terms/tokens. However, you can choose to just use presence or absence of a term instead of the raw counts. This is useful in some tasks such as certain features in text classification where the frequency of occurrence is insignificant. To get binary values instead of counts all you need to do is set binary=True.

If you set binary=True then CountVectorizer no longer uses the counts of terms/tokens. If a token is present in a document, it is 1, if absent it is 0 regardless of its frequency of occurrence. By default, binary=False.

Finally, you may want to use CountVectorizer to obtain counts of your n-grams. This is slightly tricky to do with CountVectorizer, but achievable as shown below:

The counts are first ordered in descending order. Then from this list, each feature name is extracted and returned with corresponding counts.

While counts of words can be useful signals by themselves, in some cases, you will have to use alternative schemes such as TF-IDF to represent your features. For some applications, a binary bag of words representation may also be more effective than counts. For a more sophisticated feature representation, people use word, sentence and paragraph embeddings trained using algorithms like word2vec, Bert and ELMo where each textual unit is encoded using a fixed length vector.

To rerun some of the examples in this tutorial, get the Jupyter notebook for this article. If there is anything that I missed out here, do feel free to leave a comment below.

See Also: Learning How To Build Your First Text Classifier